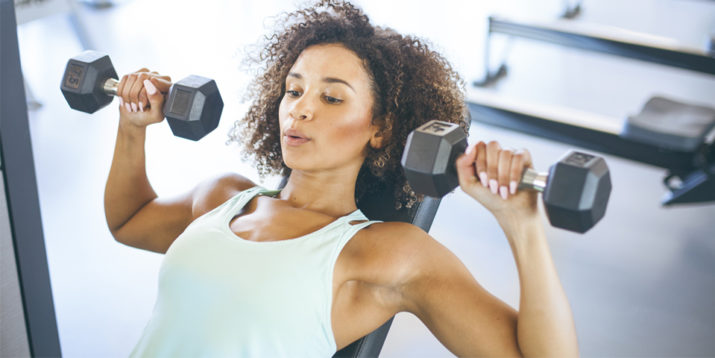 What do Dwayne â€œThe Rockâ€ Johnson, â€œThe Mountainâ€ from Game of Thrones, and Arnold Schwarzenegger (circa 1975) have in common? They all built brick-house bodies thanks to a little thing called weightlifting. But they also pursued it with the express purpose of maxing out their muscular potential. Bulking up isn’t easy, despite what some weightlifting myths might have you believe. It takes a lot more than squatting a barbell, bench pressing some dumbbells, or swinging a kettlebell a few times to sculpt a Mr. or Mrs. Olympia body. Still, the fear of bulking up simply by touching a weight keeps many people (especially women) from making strength training a mainstay of their fitness routine. Here’s a look at why this fear of bulking up shouldn’t deter anyone from weight training, and why the benefits of lifting weights outweigh any of the largely unfounded drawbacks.

Why Do People Think Weightlifting Makes You Bulky?

The weightlifting myth that suggests weight training makes you bulky is steeped in history. Magazines, movies, and the media in general have long hailed weightlifting as a big man’s game, the singular goal of which is getting swol.

â€œI have a penchant for collecting vintage weightlifting magazines that date back to the 1930s, and the covers all feature big, brawny guys,â€ says  K. Aleisha Fetters, M.S., C.S.C.S. in Chicago.

Despite this one-sided portrayal of the effects of weightlifting, exercise experts, personal trainers, and coaches work tirelessly to boast the benefits of lifting weights  as an efficient and effective method for getting in shape regardless of whether that shape is big and muscular or slim and defined. But because the meatier of the masses tend to spend a lot of time training in the weight room, people continue to associate pumping iron with bulk and brawn.

Breaking Down the Bulk Myth

Many people usually women who are afraid of bulking up typically don’t understand the complexity of building muscle, Fetters says. So let’s break down  the science  to debunk this weightlifting myth:

Strength training leads to micro-tears in muscle fibers. Your body responds by repairing the muscle tissue, and increasing the size of cells and adding new ones. Although every body pretty much generates muscle the same way, there are many factors that play into how much growth occurs and the ultimate size and shape of muscles. Gender, hormone levels, age, and nutrition all add variation to the muscle-building paradigm. Other important factors that play into muscle growth are:

â€¦and that’s just to name a few. Because of the many factors that go into building muscle, women won’t just â€œaccidentallyâ€ turn into linebackers if they lift heavy weights. In fact, most women can’t â€œbulk upâ€ even if they wanted to. â€œIt’s just not in their genetic cards,â€ says Thieme. For starters,  women tend to have lower levels of muscle-building testosterone  than men. Add to that the fact that  women also tend to have less skeletal muscle mass, and it becomes clear that they just aren’t predisposed to build the same kind of mass as men. But that doesn’t mean that lifting weights is worthless for them. â€œResearch shows that while most women can’t build as much muscle as most men, they can enjoy similar strength gains,â€ says Thieme. In short, they can enjoy all the benefits without the bulk.

Other Weightlifting Myths to Dismiss

Still wary about weightlifting despite the busted bulk myth? Let’s squash some other misconceptions about strength training and dive into some of the great benefits of lifting weights.

Truth:  You might burn more calories during an hour-long run than you will during a similarly long weightlifting workout, but your total caloric burn from the latter will be much higher. The reason is something called â€œexcess post-exercise oxygen consumption,â€ or  EPOC.

EPOC is the increased rate of oxygen consumption that occurs as your body recovers from the workout. â€œThe greatest EPOC values are seen after HIIT, but weightlifting is a close second,â€ Thieme says. â€œBoth trigger greater EPOC values than steady-state cardio [like distance running or cycling] because the recovery process is longer and more involved.â€

So even if steady-state cardio and weight-training workouts are done at the same intensity, when you call quits on the cardio, your body typically stops burning calories soon afterward typically within a few hours. But your calorie burn can remain elevated for more than 48 hours after you finish lifting weights.

Truth:  When people think about those who lift weights, they often think of stiff, inflexible bodybuilders. But here’s the thing: When a  weightlifting program  is done correctly, it can actually enhance mobility, not reduce it.

The weightlifting myth about bulking is partially to blame for this misconception. Common sense might suggest that the more muscle you have, the more it will get in the way of movement, and the more limited your range of motion will be. But gymnasts are the perfect example of how you can be both muscular  and  flexible. â€œPound for pound, gymnasts are among the strongest and most muscular athletes in the world,â€ Thieme says. â€œBut they’re also among the most limber and mobile.â€

How do they enjoy what many people incorrectly believe are mutually exclusive skills (i.e., extreme strength and near perfect mobility)? â€œEvery movement they make whether they’re training or competing is done through a complete range of motion,â€ says Thieme. â€œThat  is how you become mobile and muscular.â€

Myth 3: You have to go to the gym if you want to do a weightlifting program.

Truth:  â€œYou don’t need a fully stocked gym to get started with weightlifting,â€ says Trevor Thieme, C.S.C.S. and Beachbody’s senior manager of fitness and nutrition content. â€œAll you need are a few sets of dumbbells that challenge you, and about six square feet of floor space.â€ If you have a bench and/or a stability ball, all the better, but neither one is required.

â€œWith a few basic pieces of equipment and a smart weightlifting program, such as Body Beast or The Master’s Hammer and Chisel on  Beachbody on Demand, you can lift weights and build strength and power in the comfort of your own home,â€ Thieme says.

Truth:  While weight machines might seem less intimidating than free weights, they’re less effective for building muscle. â€œAnd the reasons are that they tend to lock you into an unnatural movement pattern and they don’t always engage muscles the same way as equivalent free-weight exercises do,â€ says Thieme.

Take the Smith machine, which requires that you move a loaded bar along a pair of vertical rails. It’s popular with strength-training neophytes and solo lifters, but a recent study in the  Journal of Strength and Conditioning Research  found that free weights can help you build more muscle. The scientists compared the barbell back squat to the Smith machine squat and found that the former worked more muscles. â€œThat’s because a free-weight squat is unsupported, requiring you to more fully engage the targeted muscles  and  use more stabilizing muscles,â€ Thieme says. â€œIt also allows you to learn proper form and lift through a range of motion that’s more natural for your unique body.â€

Truth:  Can you feel the imagery of the vintage weightlifting magazine covers creeping back in with this myth? â€œWe haven’t progressed as far from this image as strength coaches such as myself wish we had,â€ Fetters says.

The truth is that gender makes no difference when it comes to strength training. â€œMuscle is muscle,â€ Thieme says. â€œIt doesn’t matter whether you’re a man or a woman your muscles will react to training the same way.â€

Your decision to lift heavy or light should depend on your goals, fitness level, and training experience. If you’re a  beginner to weightlifting, sticking to lighter weights (or not using weights at all) is probably your best option, as that will help you master proper form, which should always be a top priority. But if you’ve been around the weight rack a few times, you should focus on using heavy (i.e., challenging) weights, but also occasionally lift lighter ones.

â€œIncorporating both heavy-weight/low-rep sets and light-weight/high-rep sets into your training program will allow you to hammer both types of muscle fibers type I and type II,â€ says Thieme. â€œType II fibers, which are larger and targeted with heavy lifting and explosive movements [like jumping and sprinting], have greater growth potential, but studies show that type I â€˜endurance’ fibers, which you engage with low-weight/high-rep sets and sustained activity [like steady-state running], can grow more than previously thought.â€

In short, if you want to maximize overall muscle growth, you shouldn’t just lift heavy you have to do some light-weight/high-rep work as well.

Why Weightlifting Is Worth It

With all these weightlifting myths cleared up, you should feel ready to make a recurring date with free weights. â€œIt’s tough to think of a reason why weightlifting isn’t worth trying,â€ Thieme says. â€œIn addition to increasing strength and power, it can increase mobility, elevate metabolism, burn fat, and enhance energy levels.â€

And don’t ignore the mental benefits of lifting weights and becoming stronger. â€œGetting your head over the pull-up bar for the first time, squatting a bar with your body weightâ€¦ it’s all incredibly empowering,â€ Fetters says. So get started on your  strength-training program of choice and get ready to watch the benefits roll in.

Openfit workouts are now on BOD so get ready to dial up your fitness game and press play on over 1,300 new […]

With  TurboFire, now you can burn more fat in half the time. This highly-intense cardio conditioning program will help you forget the […]

Want to try yoga but too intimidated by the complicated poses? Or, do you think you’re simply not flexible enough to contort […]