Under the California sun in a place known as Muscle Beach, where bronzed bodybuilders pump their cannon-size biceps, an energetic brunette works her arms — and the weight purrs its approval. 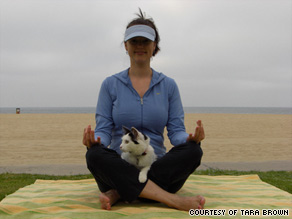 Tara Brown of Venice Beach, California, noticed that her white, spotted cat, Lucky Cat, would scurry between her feet whenever she pumped barbells.

“Every time I do exercises, stretching, yoga, she was all over me,” Brown said.

Rather than pushing her away, Brown got inspired. Her mother often exercised with her cats and had given her a 1997 how-to book called “Catflexing.”

“I like to use light weights anyway for the bicep curls and twists, so I use my cat,” Brown said. “Lucky Cat seems to want to hang out with me when I’m exercising, so I’ll use her.”

Neither she nor Lucky Cat has weight issues, but Brown discovered that exercising together can be a bonding activity.

In an age where man and animal have gotten obese, people are finding ways to battle the bulge alongside their cats and dogs.   Continued…

I knew Shakeology was delicious by itself, but sometimes you want to experiment with different flavors.   My husband makes this recipe […]

What will it take for you to be motivated and have a laser like focus on success? For David (see his story […]

Or a train to somewhere? If you haven’t already seen WALL-E, it is a must see. It is a love story, a […]

Saturday evening we heard Franklin Graham speak at our church and then afterwards spoke to one of the counselors at length.   […]